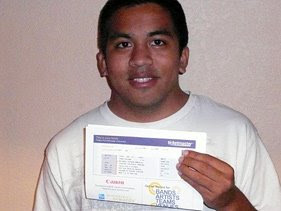 Longtime fan was among the 8,750 people to obtain tickets.

LOS ANGELES -- For years, Michael Soleta dreamed about seeing Michael Jackson perform onstage, but he was never able to land tickets. Now, Soleta, 19, at least will be able pay his final respects to the late singer.

The California native was one of the 8,750 people to successfully obtain tickets for the public memorial taking place at Staples Center on Tuesday. More than 1.6 million people registered online for the opportunity to attend the service, according to reps for the Jackson family, and a computer-generated program selected who will either see the proceedings live at the Staples Center or in a simulcast across the street at the Nokia Theater.

"I can't believe I'm actually going," Soleta told MTV News not long after he was notified via e-mail, at approximately 6 p.m. PT on Sunday. "Because for most of my life, I always wanted to go to a Michael Jackson concert. And I realized his last tour would be in London, so I wasn't going to that. I was pretty bummed about that, actually. So this is the only way I can be close to him."

Soleta and his mother -- who will be joining him at the memorial -- will be among the thousands heading to the Staples Center on Tuesday. City officials have warned ticket-less fans to stay away from the area, as only those with tickets and the corresponding wristbands will be permitted entry. Reports of a live broadcast outside the arena are false; the best way to view the service is from home, the Los Angeles Police Department has repeatedly urged fans.

Soleta however will be traveling from Fairfield, California, approximately 50 miles north of San Francisco, to see the proceedings. The avid MJ fan (he dressed up like Jackson twice for Halloween, he said) will make the trip to Los Angeles on Monday afternoon, where selected registrants were directed to pick up their tickets at Dodgers Stadium between the hours of 8am and 6pm PT. According to CNN, fans_have already began picking up their tickets and wristbands, one of which is blue and one gold.

Fans were active on social-networking sites like Twitter and Facebook on Sunday as they awaited notification. Posted messages of joy soon began appearing for those receiving tickets; messages dismay for those who didn't.

Soleta was no different. The odds of securing a ticket were estimated at 1 to 182, according to a release sent out by Jackson family reps over the weekend. "I just printed my voucher" Solet Tweeted. "I'm still in shock I was selected."

Additional plans for the public service and a private memorial taking place beforehand were still being developed at press time.
Posted by Rap Phenomenon® at 5:08 AM